Through the Lithuanian Looking Glass

I love Lithuania, plain and simple. I had never really given much thought to this small Baltic state until I took a bus from Poland and arrived in the vagabond-friendly city of Vilnius. Vilnius and its neighboring cities were delightful and worthy of detailed reflection so here it is:

On my first day in Vilnius, I left my hostel with the intention of finding Old Town but stumbled upon Kalnu Park instead. O

n a hill along the edge of Kalnu Park stands Gediminas Tower, originally constructed in 1409 and later rebuilt in 1930. On top of Gediminas hill, you can find a panoramic view of Vilnius, dotted with baroque churches, red-roofed houses, and high-reaching skyscrapers. Old and new complement each other well from Gediminas but it wasn’t until I climbed up to the Three Crosses, destroyed by the Soviets and later reconstructed, that I felt the bare bones of Vilnius were truly exposed. The Three Crosses look over the city as well as Gediminas Tower but behind the impressive monument lies a small network of autumn-littered trails and a large, open field. It’s a gorgeous area of the city that’s very reminiscent of New Hampshire so naturally I loved this part of the park. You know a place is special and worthy of your attention when the bustle and grandeur of the city center can coexist so perfectly with the blushing simplicity of nature.

The Republic of Uzupis

After reacquainting myself with nature, I hopped on over to the fascinating Uzupis District, which has served as a hot-spot for artists, literates, and alternative thinkers for years. The narrow streets are jam-packed with small galleries and hidden cafes with a maze of off-shooting alleyways. Buildings are blanketed with beautiful graffiti, fraying Pink Floyd stickers, and bright, unapologetic colors. What makes Uzupis truly unique, however, is this small distr

ict on the edge of old town actually considers itself an independent republic. Though they remain unrecognized by the Lithuanian government, the people of Uzupis have their own flag, anthem, post office, and even their own constitution! The constitution, which hangs on a silver plaque in the center of the district, lays out the forty-three rights of every citizen of Uzupis. Number 5 reads, “everyone has the right to be unique” while number 13 reads, “a cat is not obliged to love its owner but must help in time of need.” This basic list of rights, ranging from vital to slightly silly, has revitalized 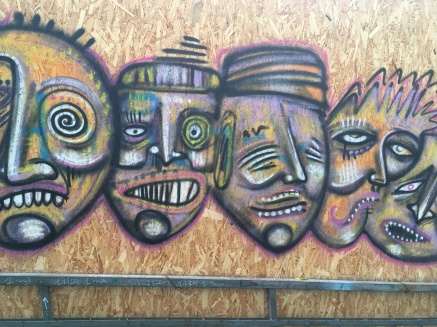 an entire community, once considered the most destitute of Vilnius. Although Uzupis has since developed into a trendy tourist attraction, members of this community have not forgotten their roots. They were a divergent culture during the oppressive rule of the Soviet Union who managed to stand tall and strong in a time when free-thinking was a distant privilege and true artistry was heavily muted. Their freedom may be in greater abundance now but they remain a creative community of rebels with a small but insistent flag waving high in the air. Pretty inspiring stuff, right?

On my third day in Vilnius, I took a bus to the small town of Trakai, home to an extraordinary castle positioned in the middle of a lake. Trakai was a breath of fresh air played like an instrument by a family of ducks circling around the perimeter of the fairy tale castle. I took my time exploring the well-preserved nooks and crannies of the interior but I found that what made the castle truly magnificent was the way the looming exterior seemed to soften in the presence of the shimmering lake. This castl 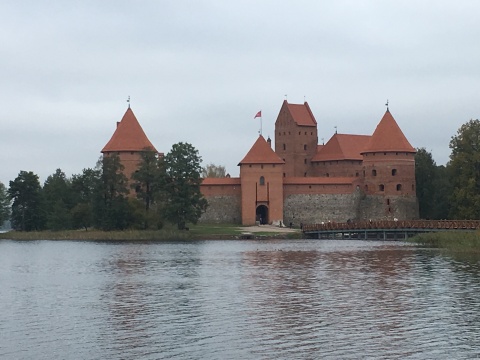 e was once a fortress, built to bar invaders from entry but everything about this lake-encroached building seemed to softly proclaim, “come in, I’m friendly!”

After exploring the castle, I walked along the lake perimeter to the bus station, stopping at a small restaurant that sold Kybyn, Trakai’s staple dish. These triangular pastries, filled with meat and vegetables, certainly lived up to the hype. I left Trakai feeling full and at peace.

My last full day in Lithuania was spent in Kryziu Kalna, which serves as a defiant answer to the ban Soviets placed on religious practices during their occup 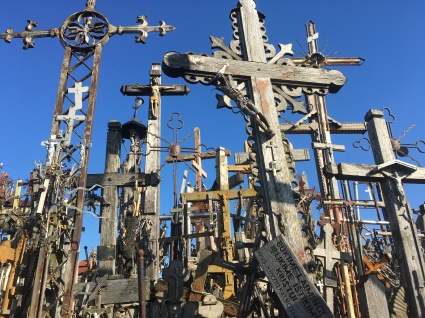 ation of Lithuania. The Hill of Crosses is rare proof that when religion meets rebellion, the result is nothing less than striking. This grand collection of iron and wooden crosses began with a few brazen individuals risking their lives to make a very important statement about religious freedom. They risked their lives simply by hammering crosses into the unfriendly ground but their efforts were not in vain.

Kryziu Kalna, situated in the middle of nowhere in Siauliai, has since developed into a crazy impressive collection that chimes against the wind and winks along with the sun. This place is a hauntingly beautiful symbol of rebellion and resistance and an important reminder that the basic rights most of us take for granted have not always been rewarded to those who truly deserve it. 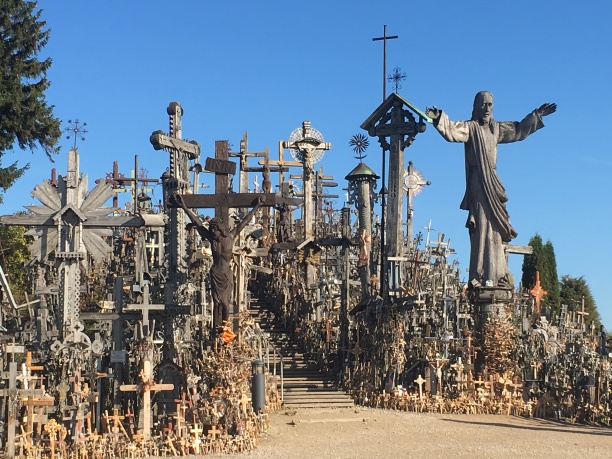 A Crash Course in Culture

Lithuania has taught me that one person can be fully invested in several cultures-a culture of artists, a culture of thinkers, of rebels with serious cause. Culture is connection and in the alleyways of Uzupis and the small paths between the iron crosses of Kryziu Kaina, everything seems so intricately connected: art to nature to faith to society to past to present. In Lithuania, culture is bold, fierce, unapologetic. It’s a path to resistance, a mode for revitalization, an inviting kind of beauty that can make a foreigner feel like they’re home again.

So thank you, Lithuania, for inviting me into your culture. I now have a much greater appreciation for the plain beauty of tucked away parks and carefully chaotic works of graffiti. My respect for cats and their basic right to human distaste has grown, though it still feels like a callous paw to the face every time a cat wandering through the street ignores my affections. I guess I can accept that even in Lithuania, cats are not completely constitutional beings.

But what I can’t accept, now more than ever, is the continued endangerment of basic human rights felt around the globe. On the Hill of Crosses, there is magnificence, there is the splendor of sun spitting against iron proclamations of faith but there is also something eerie, something heavy hanging in the air. Lives were gambled and some lives were even lost in this act of religious rebellion and even still, there are so many who may never be able to tend to the roots of their faith, beliefs, and non-beliefs in their own land.

So I end this post with a plea of sorts. Craft your constitution, stand up for what you believe in, but don’t become so encrusted in your own culture that you completely bypass the intersection because, at its core, culture is connection, protection, the precipice of change. So find the intersection and cross the road to where endangered cultures reside. Sing their anthems, wave their flags, and sign their constitutions until the iron-clad core of who they are can plant roots in their ground as well as yours.