Along the Milky River

I used to think people watched independent films simply for the thrill of saying they watched them but after spending the Fourth of July in Bologna with an indie film about American independence, I see it differently. Indie films use the obscure, the avant garde to illuminate a simple message that has been unjustly complicated.

As of late, I’ve spent some important American holidays in foreign countries. I celebrated Thanksgiving with cow liver in Romania and now I can say I tapped into my American patriotism in one of Italy’s quirkiest cities. At first, it seemed like a random place to be but in Bologna, I learned to truly appreciate the most American of American holidays.

I had heard positive mumblings about the city throughout my trip in Italy and after learning it was the founding city of the beloved Bolognaise sauce, I booked my bus ticket from Perugia.

Bologna is a cool city for several reasons. As I mentioned before, bolognaise sauce originated here but be warned, it will never be served on top of spaghetti. That would be a crime against tradition and would most definitely land you in the dreaded tourist category. But even tourists are gladly accepted in this university town where there are always a mass of students invading cafes or sitting on the sidewalks with cold beers and burning opinions in their hands. And better yet, I was lucky enough to be there during the month of July when they show a movie in the town square for free every night. 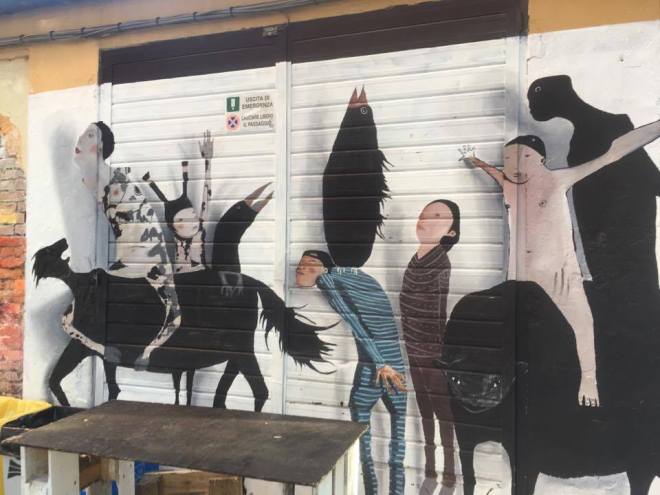 Speaking of freedom, what makes Bologna truly spectacular is that it was the first city in the world to abolish slavery. In 1256, seven years after the defeat of the feudal lords in the Battle of Fossalta, all 5,855 serfs living in and around Bologna were liberated by the Chief Magistrate. Pretty cool, huh?

Walking down the bright yellow and orange streets of Bologna everything felt unchained. People come here for the food and for the freedom-the necessities of life.

On my last night in Bologna, I ventured to massive town square with some Aussie and Irish friends I made back at the hostel. We bought ice cream so I immediately felt American even though I was surrounded by Italians watching a film in Italian (thankfully there were English subtitles).

The film was called “Nuovomondo” which translates to “New World”. As you might have guessed from the title, it’s a movie about an Italian family migrating from Sicily to Ellis Island at the turn of the twentieth century. Perfect for July 4th.

The film, made in 2006, was quite powerful but there were some elements of magical realism (I do love my magical realism) that made it quite amusing. In one scene, hopeful and hilarious Salvatore, family patriarch, dreams of America as a place where you can swim in rivers of milk. In one sequence, it literally rains money when Salvatore is asleep. In another, Salvatore and the English girl he is trying to pursue float on a gigantic carrot in a river of milk. It’s hilarious but also quite an effective way to demonstrate the many ways immigrants idolized the “New World.”

America will always be known as the New World but lately, the new ideals of our nation have become the work of horror rather than fantasy. We’re a nation founded by immigrants so why is our current immigration policy so brutal? How can we be both proud of our ancestry and scared of the people that exist outside our borders? I know it’s an argument people have heard time after time and one that many like to respond to with, “it’s more complicated than that.” Personally, I think people find it easier to complicate things and in the case of immigration, we need to anchor ourselves to the simple truth: we are all immigrants. There is no original or replica, visitor or local when it comes to people and place.

What I love most about Italy is that Italians are so proud of their tradition, respectful of and passionate about every droplet of paint that colors their national masterpiece. Their buildings are old, their founders are ancient but the people of Italy will never forget where they came from.

In Bologna, I savored the flavors of old and new and celebrated the Fourth of July as everyone should; with a tub of gelato on my lap, new friends by my side, and a foreign film about my home on a widescreen in front. There were no fireworks, barbecue, or patriotic swimsuits. No light grumblings from my British mother nor victorious smirks from my American father. I’m sure not many Americans celebrated the 4th like I did but without a doubt, July 4th in Bologna was the best yet. It almost felt like I found the true meaning of Christmas without the aid of frightening ghosts or the jolly Whos of Whoville.

Call me Tiny Tim (or maybe just Tim because I was just talking about a tub of gelato) but I feel compelled to remind you of the true meaning of the Fourth of July.

Independence is not a departure from codependence. In fact, I don’t think any person, institution, or nation can truly proclaim independence without a pillar to lean on when the load gets a little too heavy. Independent people may stand on their own two feet but someone else has made the shoes that bubble around their soles. Their bones have been nourished by someone else’s milk. Their ideas are formed from the frayed endings of someone else’s ideas. On July 4th, the United States of America proclaimed independence from the red coats yet three hundred years later, our hands are still coated in red.

Any country, especially ours, is a semblance of a near infinite amount of communities that rely on each other to survive, thrive, and live a life lush with liberty but the great foundation of our country has been buried beneath a dusty load of dangerous new ideas.

Freedom is squelched by walls, compassion is cremated by the fires of exclusivity. When appearance becomes your ticket into a country so proud of its character, the irony becomes stifling.

July 4th is an absurdly fun holiday but I fear that the annual pop of sparklers and bang of fireworks has muted the voice of our country, a voice composed of a dozen dialects echoing in the distance. They once roared into the furtive plains of our country but today, you can barely hear their purr. Drown them out long enough and our country will lose its voice. Our national anthem will lose its melody and our constitution will crumple as unprotected paper does. If we keep chipping away at our foundation, one built and maintained by the hands of immigrants, both past and present, we will be left with rubble. And this time, I’m certain that admits the rubble our flag will no longer “still be there”.

So to my fellow Americans, listen for the pause between the fireworks. Dig into that anticipatory silence, reel it back in time, and pull our flag high up into the light. Swim to those drowning in the spangled darkness and pull them back to the shore they have every right to call home.

And marvel in the magic of closeness you feel when you peer into the window of someone else’s world and catch the shadow of your own.