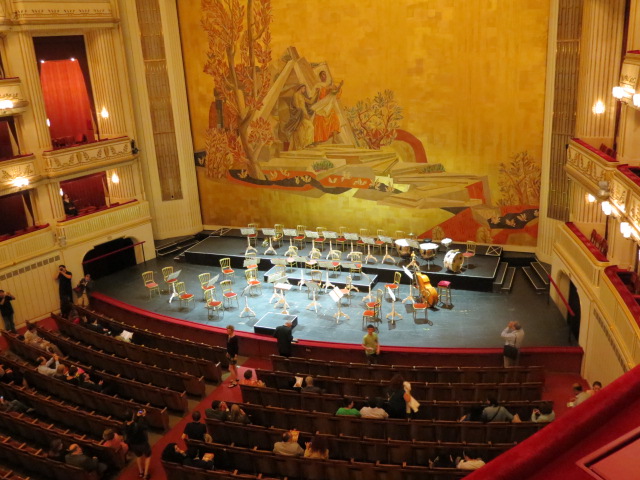 When I was a kid, I tried just about everything. Ice hockey, tennis, Board Game Club (worse than it sounds). My knees were always bruised, my head always jumbled from all those games of snake and ladders but thankfully, Board Game Club and hockey ended in middle school so I filled the void with band practice. Enter seventh-grader Anna, flute player extraordinaire.

I played the flute poorly yet passionately. Yanni was my inspiration, enraged alien whistle was my reality. I haven’t touched my flute for yonks but I don’t regret my time in the Keene Middle band. In fact, I’m still learning from the experience.

My band director, Mr. Paulo, was nuts. He was jittery, red-faced, and kind of confusing but he loved music-loved teaching it, breathing it, trailing it through the air with his tattered baton. Music and the students who tried to play it were Mr.Paulo’s natural caffeine supply. But halfway through the year, Mr. Paulo brought in a student teacher from Keene State named Mr. Pipitone (perfect name for an aspiring music conductor). He was pleasant and tentative; eager to please but a little uncomfortable. I probably wouldn’t have even remembered his name but much like it takes a flute player weeks just to learn how to make a sound, it took Mr.Pipitone ten rehearsals and one concert to become unforgettable.

On the night of our end of the year concert, Mr.Pipitone conducted one of the first songs of the night. I’m not sure if it was a teaching requirement or a gift from Mr.Paulo but in any case, once Mr.Pipitone stood at the podium, back to the audience, front towards his new army, with their brass weapons of beauty crookedly in place, something clicked. Hammered even.

One measure in and Mr.Pipitone was completely enraptured. He was bouncing on his feet, moving his arms that were once so slight in their movements with smacking power through the air. The passion he felt for the music he controlled was full-bodied and tinted pink upon his face. He was smiling, he was beaming, he was deeply enthralled to an irretrievable extent and though our looks of slight confusion said otherwise, I think we were a little bit too.

When Mr.Pipitone brought the shimmering, rippling, pulsing last note to an end, the audience gave him the applause he deserved and our newly empowered conductor fell into his first of many bows to come.

I can’t remember the name of the song we played nor its melody. I’m not sure if it was easy or hard, whether I played every note or stumbled through a few measures here and there. Middle school is a bit of a fog to be honest but Mr.Pipitone, of course, is someone I will never forget.

Since the Pipitone days, any time I want to get pumped up for something, I watch passionate conductors lead their melodic troops through classical sonatas, modern hits, angelic hymns and devilish rock ballads.

When I’m pounding my head to near concussion against writer’s block, I watch that part in Sister Act where they sing for the Pope. Whoopie Goldberg shifts from foot to foot in her swaying nun’s tunic until the music takes control of all of her limbs. Her passionate relationship with music is so contagious that even the Pope, high up in the pew by the rafters, starts dancing. The story is fiction, of course, but the passion is real and gorgeous and such an extraordinary thing to feel.

When I want to learn how to redeem and cultivate passion, I watch drumline. In Nick Cannon’s best film, another pipitonesque conductor, nourished by the steady cadence of drums, reigns in a slightly troubled teen without diminishing his ardent passion for drumming. Realization and self-awareness through snare drum is a pretty cool thing to watch.

And when finally, my own passion for writing and traveling and pretending I’m a conductor is renewed, I pull a pipitone and buy a ticket to Italy…

That’s right! I fly to Italy June 1st with the hope of learning some Italian and hunting down the perfect Italian Espresso. My first adventure begins in a medieval monastery in Fabriano and then, as always, I’m not sure what’s next. All I know is that traveling and writing about is something I am irretrievably passionate about. And once you experience the Pipitone Effect, you realize that as long as you lead with passion, you will always stay on beat.