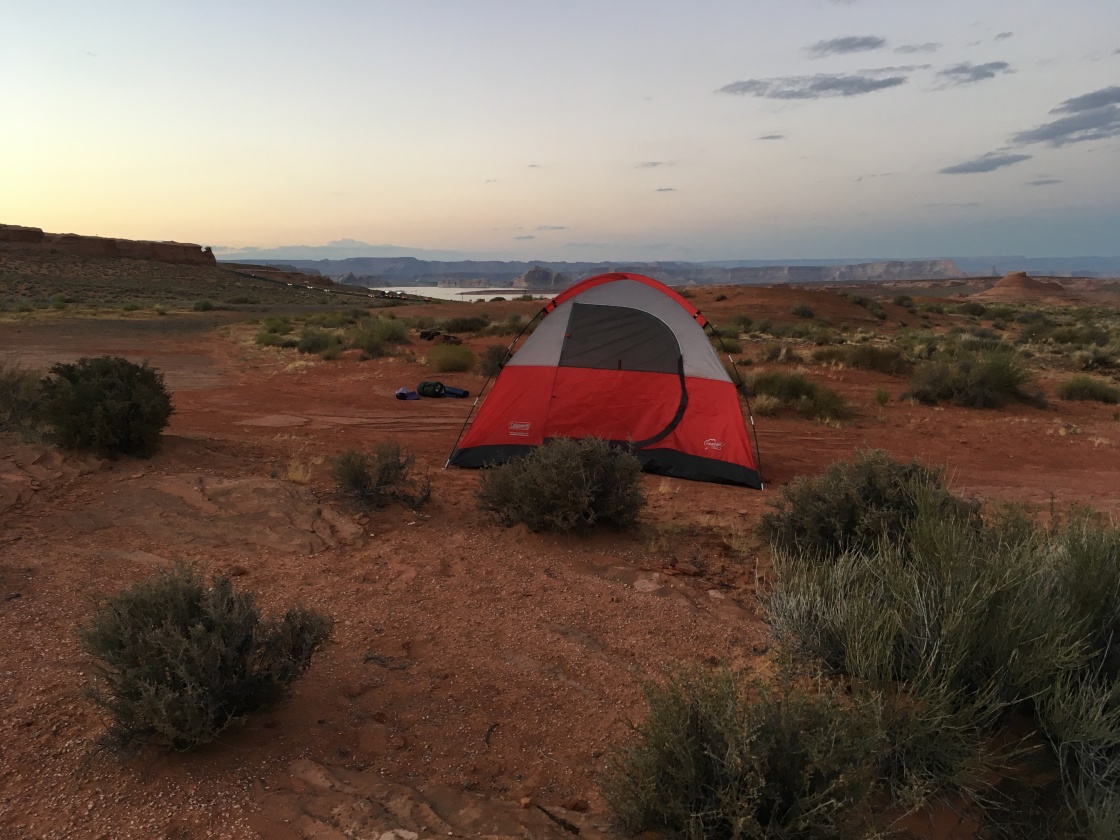 The Road: Part I

Chapter 1: From Vegas to Albuquerque

On this road there are no godspoke men. They are gone and I am left and they have taken with them the world. Query: how does the never to be differ from what never was?

After I read Cormac McCarthy’s The Road, a novel drenched in apocalyptic terror, I decided  that McCarthy, a mess of brilliance, a master of torment and edge, eloquence and longing, would make a terrible road trip companion. His road is haunted by nameless, blood-thirsty men. Families are frayed and starved of life. God is absent; a menace even.

And there are no snacks.

While I can appreciate the relationship between a writer and a road packed with metaphors rather than gravel, the roads I’ve had the pleasure of traveling down bear no resemblance to those born out of McCarthy’s pen. I travel down the roads that let life gain speed and swell with beauty.

When you go on the right kind of road trip and  drive without fear or purpose you get a 360 view of everything that is new, untouched, unseen until you stick your head out of the window, straight into the frothing waterfall of mountain air, and realize everything we’re surrounded by, everything we’re made of is recycled. Everything new is simply everything old- lathered, revived, illuminated. Road trips connect old ends and new beginnings and shine a decadent desert sun on the relationships that steer you away from the road blocks and towards the McCarthy-resistant, Kerouac-indulgent, rambunctious and iridescent unknown.

My friend Rachelle and I have spent a lot of time hanging out with each other in the unknown. Since meeting freshman year of college, we’ve both changed our majors, reluctantly at first until we discovered pledging ourselves to what we are truly passionate about is incredibly rewarding (though perhaps not financially).

We’ve fought for and against practicality, traveled far away from home and then reveled in our return. We know each other best in an uncertain world so I couldn’t think of a better person to drive through the wild and Culver-encroached west with (if you have yet to discover the magic of Culver’s frozen custard, I am so sorry).

Rachelle started her trip in Montana after completing a year-long AmeriCorps stint and picked me up from the airport in Las Vegas exactly a month ago. After two glorious months in Italy and a sixteen-hour layover in Manchester that felt just as long as the trip itself, being in the US again felt weird. Being in Vegas felt weirder but since I bypassed the strip and spent my gambling dollars on the Safeway salad bar instead of the slots, I can’t say I’ve done the whole Vegas thing.

I also can’t say I regret veering away from Vegas and towards what patiently slumbers beyond because infinite skies flooded with stars and blushing landscapes make neon signs look dull. 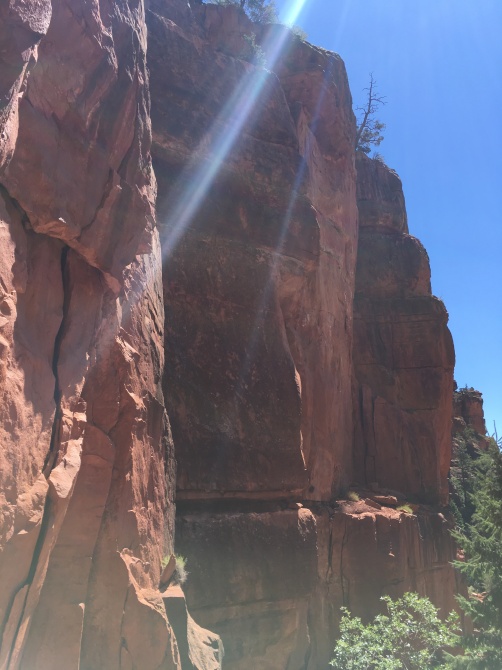 The drive from Vegas to the Grand Canyon was as vast and desert-like as promised. The landscape was anti-alpine yet all the more beautiful. It was five hours of driving but I could have stayed in the car for another ten.

On our first night, Rachelle and I camped just outside the North Rim of the Grand Canyon in a gorgeous campsite we found on https://freecampsites.net/ . This website is a goldmine for budget campers. We got to camp in some stunning areas within National Forests, on top of gobsmacking vistas, and dead center in a desert without spending a dime. Pretty spectacular wouldn’t you say?

The next morning we emerged from our sleeping bags as the roaming cattle nearby screamed their lungs out.  I think they were just yawning and shaking out the morning sludge but it sounded a lot like someone was being murdered. That being said, the sound of screaming cattle pairs well with a couple of girls with unkempt hair eating gloopy oatmeal out of a pot, scanning their surroundings with a simple smile on their faces. Nature spoiled us rotten that day and every other day to come.

Within an hour of leaving the campsite, we arrived at the North Rim of the Canyon. As you might expect, the Grand Canyon will punch a hole in your lungs and knock you off your feet no matter what angle you view it from. But after seeing both the Southern and Northern Rims, I have to say the North Rim is far superior. There are less tourists, more trees, and a lower probability of melting into a complete puddle under the sun. Your camera will insist on consuming every part of the canyon but it’s hunger will never be satisfied because the Grand Canyon is other-worldly and photos will never quite do it justice. All the more reason to stow away the camera and let your eyeballs flutter away, which I did…after taking TONS of photos 🙂

Rachelle and I spent the entire day hiking down, up, and along the North Rim. Even in August, arguably the busiest season of any tourist attraction, the crowds were few and far between. There was so much space and stillness in the air-a grand place indeed that’s never easy to leave.

From the Grand Canyon we ventured on to Page, Arizona, home to the famous Antelope Canyon and Lake Powell. In Page, I learned that luck and happenstance favor the clumsy yet well-intentioned traveler.

Just as the sun scuttled out of view, Rachelle and I set up the trusty red tent in a barren, blushing desert just off of the highway (gotta love freecampsites.net). It was by far my favorite camping spot and it only got better in the morning. Due to a timezone confusion, we set our alarms for 5:30am instead of 6:30 and woke up to the most amazing sunrise I’ve ever seen. It’s not often you get rewarded for your mistakes.

Later in the morning, we ran through a sky drenched in sunlight and rewarded our tired and confused bodies with smoothies and parfaits.

Post-breakfast, we originally planned to visit the Antelope Canyon only to find it was tour only at a steep price of $40 per person. While I’m sure it would have been worth the money, we just couldn’t justify cutting into the ice-cream budget so instead, we opted for a swim in Lake Powell.

Lake Powell was simply heaven.I have never been so thankful that something didn’t work out because we got to spend hours in the clear and fantastically blue canyon waters without a whim or worry. The surrounding canyon rocks seemed to swirl into infinity. The water was warm and free of algae and other unmentionable lake scraps.  Some invisible force must have dragged us out of Lake Powell because there’s no way I could have left that place willingly.

From Powell, we drove on to Albuquerque were we reunited with our good friend and fellow runner Kristen. Kristen and her family would do well in the tourist industry because they sure know how to treat guests to the lap of luxury. The simple fact that they had a shower and bed to offer would have been enough to warrant a five-star rating. On top of this, Kristen’s parents made us some extraordinary meals, including the most delicious homemade breakfast burritos you could possibly imagine. They also have an impossibly cute dog.

Forever deserving of a double-digit star-rating for sure.

Before we left quirky and beautiful Albuquerque, Kristen gave us a tour of the old town which was decorated with homemade pottery and Walter White t-shirts a plenty. The smell of roasting green chiles saturated the air. My nostrils flared and my sunburn grew exponentially. I wasn’t designed to live out there, out in the blazing, bursting, bountiful West but I’d go against nature any day for a city like Albuquerque. Places that share little in common with you will always be the most intriguing. As my Italian host brother once said, strangers are just friends-to-be. Surely that applies to strange places, too.

So tune in and quiet those engines friends and friends-to-be because I have so much more to tell you!

But the epic tales of  the cricket-gobbling Bulgarians and 14,000 ft peaks of Colorado will have to wait because I’m out of gas and long overdue for a snack.

Catch You in Colorado,